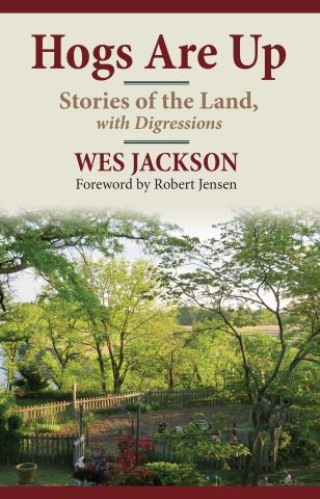 Stories of the Land, with Digressions

Hogs Are Up: Stories of the Land, with Digressions reveals what makes Wes Jackson tick. What kind of lessons does he draw from his unique life experiences, and how do they shape his profoundly revolutionary worldview? Sometimes funny, sometimes wistful, always insightful, this volume demonstrates that when telling a good story, digressions can be the main point. Born during the Great Depression, Jackson tells stories of his youth on a diversified farm in the Kansas River Valley near Topeka, Kansas, culminating in more than forty years of leadership to radically transform agriculture, literally at its very roots. Wes Jackson draws deeply from the lessons learned from his experience dating from World War II to his work at The Land Institute to establish a new Natural Systems Agriculture. But this book is more than that. It includes an eclectic mix of thinkers and doers he’s met along the way.

Wes Jackson is heavily influenced by the cultural legacy of grandparents, all four of whom were born before the Civil War began, and from his parents, who were born before 1900. He was born into a culture of crop diversity where animals and people were out in the fields and around. He saw the tractor arrive and the horses leave. After you read Hogs Are Up: Stories of the Land, with Digressions you may share his misgivings about what conventional thinkers see as “progress.”

Jackson is constantly exploring the world around him and will engage anyone who can help him think about a discovery, an experiment, or recent insight. Jackson believes that our insights must go beyond the latest scholarly study and government report if we are to get the necessary interest for people to change. The stories and digressions he shares in Hogs Are Up are the fruit of a longtime effort to lay the agricultural and cultural foundation for a new worldview grounded in nature’s principles and located in rural communities able to survive through a new relationship of humanity to the ecosphere.

Wes Jackson: Wes Jackson is cofounder and president emeritus of The Land Institute in Salina, Kansas, and the author of numerous articles and books, including most recently Nature as Measure: The Selected Essays of Wes Jackson and Consulting the Genius of the Place: An Ecological Approach to a New Agriculture.