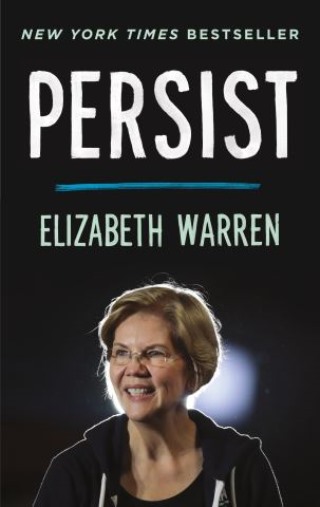 Elizabeth Warren is a beacon for everyone who believes that real change can improve the lives of all Americans. Committed, fearless, and famously persistent, she brings her best game to every battle she wages.

In Persist, Warren writes about six perspectives that have influenced her life and advocacy. She’s a mother who learned from wrenching personal experience why child care is so essential. She’s a teacher who has known since grade school the value of a good and affordable education. She’s a planner who understands that every complex problem requires a comprehensive response. She’s a fighter who discovered the hard way that nobody gives up power willingly. She’s a learner who thinks, listens, and works to fight racism in America. And she’s a woman who has proven over and over that women are just as capable as men.

Candid and compelling, Persist is both a deeply personal book and a powerful call to action. Elizabeth Warren—one of our nation’s most visionary leaders—will inspire everyone to believe that if we’re willing to fight for it, profound change is well within our reach.

Elizabeth Warren: Elizabeth Warren, the widely admired former presidential candidate, is the senior senator from Massachusetts. She is the author of eleven previous books, including A Fighting Chance and This Fight Is Our Fight, both of which were national bestsellers. The mother of two and grandmother of three, she lives in Cambridge, Massachusetts, with her husband, Bruce Mann, and their beloved dog, Bailey.