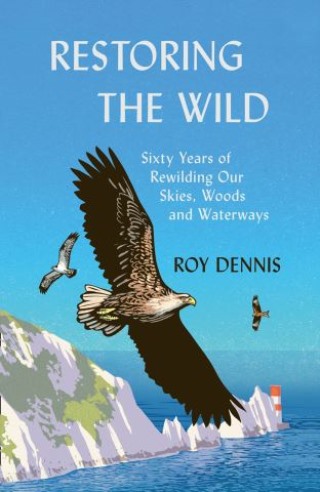 Restoring the Wild: Sixty Years of Rewilding Our Skies, Woods and Waterways

The RSPB’s Book of the Season

The distinctive white-tailed sea eagle was driven to extinction in Britain more than 200 years ago, but this immense predator is making a return to our skies, thanks to Roy Dennis, an ornithologist, conservationist and arguably the driving force behind the UK’s reintroduction agenda.

Roy was instrumental in returning the Osprey, red kite and golden eagle to the British Isles, but the road to reintroduction isn’t an easy one. In what will surely be the seminal book on British reintroductions, Roy details the painstaking process of returning the Goldeneye to Scotland, one duckling at a time, the die-hard determination needed to make a dazzling success of the red kite reintroduction and the leap of faith we will all need to make to accept sharing our forests and skies with large carnivores again. He also illustrates all that we have to gain by restoring our ecosystems to balance.

Filled with a lifetime’s worth of stories from the front lines of conservation, Reintroduction offers an eye-opening insight into the complexities of reintroducing extinct animals to Britain. It’s also an intimate portrait of these apex predators and a reminder of why we need them.

Roy Dennis, MBE is a field ornithologist and wildlife consultant. He has worked in the Highlands and Islands of Scotland since 1959, most notably on the conservation of rare birds and the reintroduction of lost species, such as the white-tailed eagle and red kite. He is a specialist in raptor conservation and reintroductions in the UK and abroad, having been involved with osprey, red kite, golden eagle and sea eagle reintroduction projects, and his satellite tracking studies since 1999 have broken new ground and given great interest to the public via our map-based website. He has long been an advocate for restoring lost mammals to Scotland, particularly beaver and lynx. In 1992 he was awarded a MBE for services to nature conservation in Scotland and in 2004 was voted the RSPB Golden Eagle Award winner for the person who had done most for nature conservation in Scotland in the last 100 years. He is a writer, lecturer and broadcaster.